How Can We Save the Amazon Rainforest?

Recently, I have embarked in a collective effort to write a blog post on the economics of public policies to fight deforestation as part of a series of posts in preparation of COP21, a joint venture between TSE, Le Monde and The Economist. I have had the chance to work with a team of amazingly cool, witty and nice collaborators (Arthur van Benthem, Eduardo Souza Rodrigues, Julie Subervie). The post has appeared in French here and in English there.

What I would like to do here is to summarize our ideas and then highlight the results of one recent paper by Julie which gives the first robust evidence on the effectiveness of one particularly important policy, Payments for Environmental Services (PES), in the Amazon.

The reasons why we want to stop deforestation are pretty straightforward: deforestation is responsible for about 10 percent of climate change emissions and leads to massive biodiversity losses. Actually, deforestation is not the direct result of a private effort by landowners, it is the result of a massive colonization campaign sponsored by the junta government in Brazil in the 70s.

The key question is which policy to choose to halt deforestation. There are a lot of options. Governments tend to favor regulation, like declaring some land protected and banning all cutting there. Economists call these policies "Command and Control" because they are highly interventionist and leave no leeway to agents to adapt to the policy. Economists favor price instruments above all, such as a carbon market or a carbon tax. The key advantage of these policies is that they let much more leeway to agents to adapt: when there is a price on carbon, the less costly carbon reduction options are the ones implemented first. With command and control, you might impose much higher costs to reach the same environmental gain by banning very profitable cuts of trees and allowing some trees to be cut where economic returns are actually small. PES are an intermediate between command and control policies and price instruments. With PES, governments pay farmers who accept to conserve their trees standing a fixed amount per hectare. Theoretically, PES are less efficient than market instruments, since they leave room for farmers to choose not to receive the incentive, whereas a tax or a price is for everyone to pay. Also, those who volunteer might be the ones who would have not cut their trees anyway even in the absence of payment. If this is widespread, they benefit from a windfall effect: they do nothing and get paid. PES should be better than command and control though (we say that they are second best instruments, actually they are third best since they are linear contracts whereas one could think of nonlinear PES contracts that would be the true second best option).

So in theory, market instruments > PES > Command and Control.

But this is theory. What we would like to know is whether these predictions hold in real life, right? I mean, that's useful to know how policies work in the perfect, vaccum-full world of models but how do these predictions hold up in reality? Many things can go wrong in the imperfect, air-full realm of the real world. Agents might not be as well-informed or as rational as we assume that they are in our models, tax enforcement might be undermined by corruption or inefficiency.

It turns out that it is extremely difficult to measure the effectiveness of forest conservation policies. Why? Because we face two very serious empirical challenges: additionality and leakage.

Additionality is a key measure of a program success: how much did the policy contribute to halt deforestation where it was implemented? For example, by how much did deforestation decrease in protected areas? Or among farmers subject to a deforestation tax or to a price of carbon? Or among farmers taking up a PES? In order to measure additionality, we have to compute how much deforestation there would have been in the absence of the policy. But this is extremely hard to do since it did NOT happen: the policy was actually implemented. The situation of reference to which we would like to compare what happened has not happened, we call this situation a counterfactual.

Since we cannot directly observe the counterfactual, we are going to try to proxy for it using something observed. We could take as a proxy the situation before the policy was implemented. But this proxy might be very bad. For example, after the Brazilian government tightened regulatory policies and improved forest monitoring thanks to satellite imagery in the 2000s, deforestation in the Amazon slowed down to approximately half a million hectares annually. It looks like the policy was successful. But, at the same time, lower prices for soybeans and cattle products also reduced incentives to deforest. So what was the main driver of the decrease in deforestation? How much forest did the policy save exactly?

We could also use areas and farmers not involved in the policy as a proxy for the counterfactual situation. But this proxy might be very bad also. For example, even if we observed that farmers who participate in a PES program have lower deforestation rates than those who do not, this does not imply that the scheme actually reduced deforestation. For sure, farmers who stand to profit the least from cutting down their trees are the most likely to sign up for the program. As a result, the program might end up paying some farmers for doing nothing differently from what they would have done anyway. And so the additional impact of the program may very well be small.

Leakage occurs when a conservation policy, which may be successful locally, triggers deforestation elsewhere. For example, a farmer may stop clearing forest on plots that he has contracted under a PES program but at the same time increase deforestation on plots not covered by the contract. On a larger scale, the threat of paying fines to a provincial government may give incentives to farmers or logging firms to move operations to a neighboring province. In such cases, leakage undermines the additionality of conservation programs. Detecting leakage effects is even more difficult than detecting additionality. Indeed, we not only need to compute a counterfactual, but we first and foremost need to detect where the leakages go.

As in medicine when testing the efficacy of a new drug, the gold standard of proof in empirical economics is to conduct a Randomized Control Trial (RCT). In a RCT, we randomly select two groups of individuals or regions and implement the policy only for one group, keeping the second as a control. The difference between treatment and control provides a direct measure of the additionality of the policy. RCTs can also be designed to measure leakage. Though RCTs are commonly run to evaluate education or health policies worldwide, there has been only few randomized evaluations of forest policies. Kelsey Jack from Tufts University performed RCTs to assess tree planting subsidies in Malawi and Zambia. To my knowledge, there are no similar results for forest conservation PES, in Brazil or elsewhere. Seema Jayachandran has been conducting an RCT-based evaluation of a forest-conservation PES program in Uganda. The experiment has been designed to estimate both additionality and leakage effects. We are waiting for her results impatiently.

In the absence of RCTs, economists usually try to identify naturally occurring events or “experiments” that they hope can approximate the conditions of an RCT. In a recent paper, soon to be available here, Julie and her coauthors have conducted such a study of one of the first forest-conservation PES ever implemented in the Amazon. The key graph in this paper is the following: 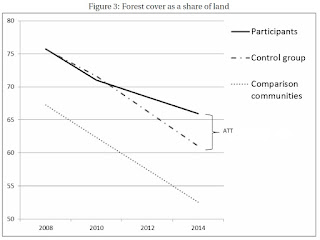 The program was implemented in 2010. What you can see is that the pace of deforestation decreased after 2010 among participants, while it remained the same among non participants. The change in the difference in land cover between participants and comparison communities is a measure of additionality: it is pretty large, an increase of about 10 p.p. Looking at comparison communities, you can see that the path of deforestation has not increased there, while it should have if leakage was present. What seems to have happened is that farmers have started farming more intensively the previously deforested land, and have actually decreased deforestation on new plots. Using these estimates, an estimate of how much carbon was saved and of the value of a ton of carbon, Julie and her coauthors estimate that the benefits of the program exceed its costs.

A couple of comments here. First, this work is a beautiful example of empirical economists at work. This is how we hunt for causality in the absence of RCT. In order to check for the validity of our natural experiments, we try to see if they do not find effects where they should be none. Here, you can see that before 2010, the deforestation trends in participants and comparison communities were parallel. This is supportive of the critical assumption Julie and her coauthors make here: in the absence of the PES, deforestation trends would have remained the same over time. Second, there is still work to do. The measure of forest cover is declarative and does not rely on satellite data. It is still possible that farmers lied about how many hectares they had in forest still standing. The number of observations is small, so precision is small. And if observations happen to be correlated within communities, precision would even be lower. We would also like to know whether these changes in farming practices are going to persist over time or if the deforestation is going to resume as soon as the program stops. Julie is trying to collect new data on the same guys several years later to check this. Third: these are amazingly encouraging results. It seems that we can do something to save the Amazon rainforest after all. Rejoice.
Posted by Sylvain Chabé-Ferret at 1:06 PM No comments: