The Empirical Revolution in Economics: Taking Stock and Looking Ahead

I have been asked to write a piece for the excellent TSEconomist, TSE student magazine. I took the opportunity to put together my ideas on where empirical economics stands and where it is going and what we can do to make things even better.

The last 40 years have witnessed tremendous developments in empirical work in economics. In a recent paper, Josh Angrist and his coauthors show that the proportion of empirical work published in top journals in economics has moved from around 30% in 1980 to over 50% today. This is a very important and welcome trend. In this article, I want to take stock of what I see as the main progress in empirical research and look ahead at the remaining challenges. 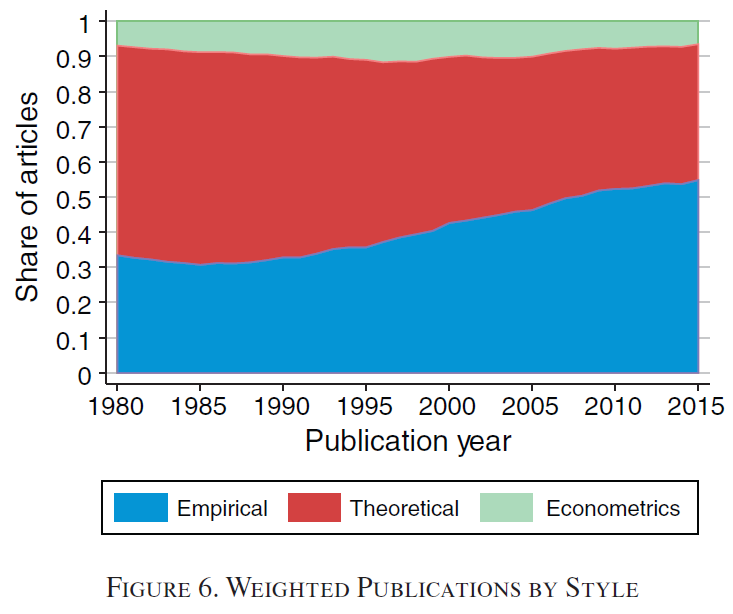 In my opinion, the main achievement of the empirical revolution in economics is causal inference. Causal inference, or the ability to rigorously tease out the effect of an intervention, enables us to rigorously test theories and to properly evaluate public policies. The empirical revolution has focused the attention on the credibility of the research design: which features of the data help identify the causal effect of interest?


With the empirical revolution, economics has grown a second empirical leg along its extraordinary first theoretical leg and is now able to move forward as a fully fledged social science, weeding out wrong theories, and as true social engineering, stopping inefficient policies and reinforcing the ones that resist empirical tests.

The achievements of the empirical revolution are outstanding, in my opinion on par with the most celebrated theoretical results in the field. It is obvious to me that in the following years several of the contributors to the empirical revolution in economics will receive the Nobel prize: Orley Ashenfelter, Josh Angrist, David Card, Alan Krueger, Don Rubin, Guido Imbens, Esther Duflo, Michael Greenstone, David Autor. Just to mention a few important achievements, in no way exhaustive:
What I find extraordinary is how much empirical results have supported as well as falsified basic assumptions in economic theory such as functioning markets and rational agents. Sometimes agents behave rationally, sometimes they do not. Sometimes markets work, sometimes they do not. Sometimes it matters a lot, sometimes it does not. I think we are going to see more and more theory trying to tease out the context in which deviations might matter or not.

The empirical revolution has also brought about a new type of methodological research. The economists' empirical toolkit now has structured around 5 types of tools for causal inference: lab/controlled experiments; Randomized Controlled Trials (RCTs); natural experiments; observational methods and structural models. Aside the impressive continuing achievements of theoretical econometrics, we see now methodological work investigating the empirical properties of methods of causal inference:
But challenges lay ahead that have to be addressed head on. I am very optimistic since I can see the first responses already taking shape, but I think the swiftest our response to these challenges will be, the most credibility our field will have in the public’s eye and the quickest our progress will be.

The first challenge that I see would be an exclusive focus on causality. Science starts with observation, documenting facts about the world that are in need of an explanation. One of the most influential empirical work in the last decades is Thomas Piketty’s effort, along with coauthors, to document the rise of inequality in countries all around the world. Observing new facts should also be a part of the empirical toolkit in economics.

The second and most important challenge that I see for empirical research in economics is the one of publication bias. Publication bias occurs when researchers and editors only publish statistically significant results. When results are imprecise, publication bias leads to drastic overestimation of the magnitude of results. Publication bias has plagued entire research fields such as cancer research and psychology, fields that now both face a replication crisis. A recent paper by John Ioannidis and coauthors measures the extent of publication bias in empirical economics and finds it to be very large: “nearly 80% of the reported effects in [...] empirical economics [...] are exaggerated; typically, by a factor of two and with one-third inflated by a factor of four or more.” This is a critical problem. For example, estimates of the Value of Statistical Life that are used to evaluate policies are overestimated by a factor of 2, leading to incorrect policy decisions.

The third challenge is that of precision: most results in empirical economics are very imprecise. In order to illustrate this I like to use the concept of signal to noise ratio. A result barely statistically significant at 5% has a signal to noise ratio of 0.5, meaning that there is twice as much noise as there is signal. Such a result is compatible with widely different true effects (from very very small to very very large). But things are actually worse than that. Ioannidis and coauthors estimate that the median power in empirical economics is 18%, which implies a signal to noise ratio of 0.26, meaning that the median result in economics contains four times more noise than it has signal. I attribute this issue to an exclusive focus on statistical significance at the expense of looking at actual sampling noise.

How to address these challenges? In my opinion, we need to see at least three major evolutions in publishing, research and teaching.


So many things to do. It is so exciting to see this revolution and to be able to contribute to it!

Corrected on May 23, 2018: addition of links to tests of and corrections for publication bias.
Posted by Sylvain Chabé-Ferret at 5:40 PM