What is Sampling Noise?

This post is the second in a series of six posts in which I am arguing against the use of p-values for reporting the results of statistical analysis. You can find a summary of my argument and links to the other posts in the first post of the series. In this post, I introduce the problem of sampling noise, the issue that p-values are trying to solve. It is only when I started to understand better what sampling noise really is that I started to hate p-values so much.

Here is an illustration from my class. In order to build this illustration, I generated 1000 random allocations to a treatment and control group for four different samples of increasing size taken from the same population (i.e. governed by the same model). For each random allocation, I computed the difference in average outcomes between treatment and controls. The histogram presents the distribution of these estimates. In red is the true effect. (The histogram actually presents the results of drawing a different sample at each replication on top of a different treatment allocation. Both graphs are extremely similar, I just happen to have this one readily available in a nice suitable format. The comparison with the graph obtained with keeping the same sample can be found in Lecture 0 of my course). 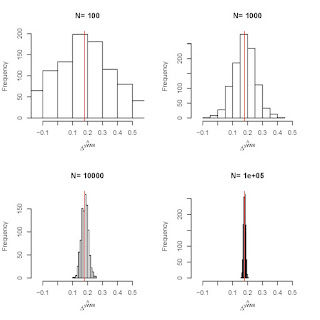 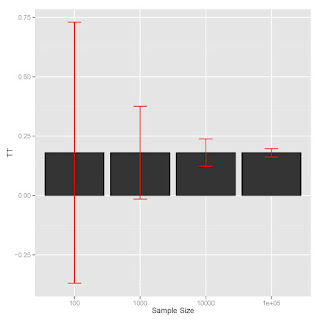 So the question then becomes: what can we do when there is sampling noise? At least two things:

Let me talk about quantifying sampling noise, because this is what p-values are about. Several of the most important tools in statistics enable you to compute an estimate of sampling noise using information from only one sample. Think about how beautiful this is: you can recover an estimate of an unobserved quantity defined over replications of samples from one unique sample! We have several ways to do that:
Here is an example from my class where you can see the true sampling noise (in red) along with its estimate from one sample obtained here using the CLT (in blue). 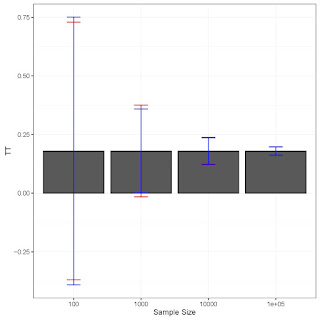 Now that we understand what sampling noise is about, and how to estimate it, we will see in the next installment of the series, how p-values deal with sampling noise.
Posted by Sylvain Chabé-Ferret at 7:15 PM